Despite what many drivers think, pricier synthetic motor oil provides far greater engine protection than conventional oil, according to a study released Tuesday by the Automobile Club of Southern California, which recommended that motorists consider making the switch.

“With synthetic oil’s superior resistance to deterioration, AAA’s findings indicate that it is particularly beneficial to newer vehicles with turbo-charged engines and for vehicles like those in Southern California that frequently drive in stop-and-go traffic, tow heavy loads or operate in extreme hot or cold conditions,” he said.

Auto Club officials said switching to a synthetic motor oil costs an average of about $5 a month, noting that a conventional oil change averages about $38, while a synthetic oil change is about $70. That increased cost is often cited as a reason for drivers to stick with the traditional oil, according to AAA.

According to a nationwide survey of drivers, 27 percent said they were unsure if synthetic oil would be beneficial, while 17 percent simply did not believe the synthetic is a better choice. Some drivers surveyed said they felt synthetic oil is too expensive, offers no benefit or is used as an attempt by repair facilities to “up-sell” customers.

Skaien said he understands drivers’ skepticism about choosing an option that can double the cost of an oil change, but the move can be beneficial over time.

“While manufacturer-approved conventional oil will not harm a vehicle’s engine, the additional $30 per oil change could actually save money in the long run by protecting critical engine components over time,” he said. 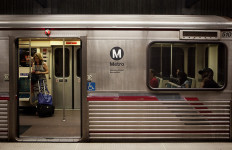 Still Have a Metro Transit Token? Better Use it Friday→

Garcetti Calls for Better Governing during Cities’ Platform for 2020 Election→