Garcetti was set to deliver the mayoral address Friday afternoon at the presidential session of the summit with Lopez Obrador and Claudia Sheinbaum, the Mexico City head of government.

Garcetti is scheduled to discuss the links to trade, commerce and culture between Los Angeles and Mexico and the current status of tariffs and immigration issues between Mexico and the U.S., according to the mayor’s office.

Garcetti is also expected to meet with the U.S. Conference of Mayors at the summit to “exchange ideas” with officials from Mexico and Canada on shared issues ranging from climate change and transportation infrastructure to economic development and public safety, according to his office.

According to San Diego Mayor Kevin Faulconer’s office, the North American Mayors Summit is an initiative of the Mexican Foreign Minister, Marcelo Ebrard, and the U.S. delegation is led by the U.S. Conference of Mayors. More than 100 mayors from throughout the United States, Mexico and Canada are expected to convene at the summit, which is the first of its kind.

Garcetti’s travel expenses were jointly paid for by the city of Los Angeles and the Mexican government, his aides said.

He is scheduled to return to Los Angeles by Sunday to participate in the L.A. Pride Parade. 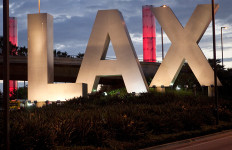