So far, there are two confirmed cases and three “presumptive cases,” in which officials are awaiting confirmation from federal authorities. Four of the people contracted it through travel-related activities, and one got sick from “person-to-person” contact with someone who was ill.

One man who contracted the virus, officially known as COVID-19, has recovered fully.

The agency previously reported cases of a man in his 60s and a woman in her 30s who had recently traveled to countries with widespread outbreaks.

“I’m trying to put the real risk to some perspective,” Wagner said. “I’m hearing from chambers of commerce in my district that businesses are cutting back on travel to Orange County. We’re seeing tourism down. We’re seeing conventions get canceled, and I guess my question is from a public health standpoint, is that an appropriate response?”

Wagner said it appears some people go undiagnosed because it feels as if they have a cold only.

“Is this a disaster in waiting?” Wagner asked.

Dr. Nichole Quick, the county’s chief health officer, replied that, “The flu is a much greater risk than coronavirus. Now, that being said, part of people’s fear related to this is we simply don’t know what this is going to look like. We don’t have wide enough testing to know how many people are infected across the country.”

Quick added that it is important to “empower” the public with information on how they can lessen the risk by doing the routine precautions to avoid the flu such as washing hands regularly, covering the mouth when sneezing or coughing and staying home from work when sick.

Supervisor Andrew Do pointed out that “government agencies at federal and state level are asking employees to be ready to work off site… When you have government agencies preparing to respond in that way how can the public get any kind of confidence in terms of when to go with one extreme of quarantine and the other extreme of we just have five total cases?”

Quick said, “The overall risk to residents of Orange County is low.”

Supervisor Lisa Bartlett said her sister lives in Westchester County in New York, which has been hard hit by a quickly spreading outbreak.

“Not to ring alarm bells, but my sister lives in Westchester County, which has about 20 reported cases,” she said. “It started with one person not feeling well who asked a neighbor to bring him to the doctor… He infected his whole family, his friend infected his whole family… so we need to be very, very cautious because this can spread very, very quickly… It can happen literally overnight.”

Do sparked a spirited debate when he moved to direct staff to limit meals to just the residents of the Courtyard emergency shelter across the street from the Hall of Administration, where the board meets. The Courtyard has about 400 residents, but about 100 just show up for meals and other services.

“I don’t think we’re gaining anything in that directive,” Bartlett said, adding it made more sense to her to give meal recipients a sanitary wipe before eating.

“By dispensing antibacterial wipes that might help as opposed to limiting the public at-large,” Bartlett said.

Do said, “Increasing the density of the people in the Courtyard is going to contribute to greater risk.”

Do argued that the homeless population in the emergency shelter is at greater risk of getting sick. He also said authorities are discouraging mass congregations, and he said it was a “double standard” to not apply the same rules at the Courtyard as is done at the county’s other shelters, which are by appointment only and are locked down.

County counsel Leon Page recommended the board schedule an emergency meeting to discuss a change in policy so officials can avoid a Brown Act violation. The act that guarantees the public’s right to attend and participate in meetings of local legislative bodies.

John Wayne Airport Director Barry Rondinella told the supervisors that cleaning and sterilization has increased at the airport by about 25%. The airport also has more hand sanitizers and has boosted advertising to passengers to promote common safety tips.

Health Care Agency officials will also hold a “virtual town hall” from 6 to 7 p.m. Thursday. Residents may call 855-756-7520, ext. 56750# to join the call. More information can be obtained by emailing ceocom@ocgov.com. 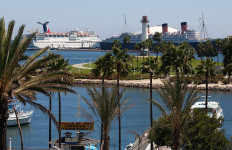