A Rancho Cucamonga woman struggled over the weekend in New Orleans before local police agreed to investigate the beating of her 64-year-old uncle more than a week ago. The attack left the victim paralyzed.

Doug David this month made one of his many trips to New Orleans. He’s been to the French Quarter so many times in two decades that some musicians know him, according to the woman.

But Sunday night, David was in University Medical Center there, paralyzed from the neck down and fighting to recover lung function well enough to return home.

Eleven days ago, the La Jolla retiree was assaulted yards from the Music Factory record store and concert venue in the Faubourg Marigny neighborhood near the French Quarter. Nearby is the home of OffBeat Magazine.

David was finally moved out of the intensive-care unit Sunday, being watched by his 40-year-old niece, Alicia Foulds of Rancho Cucamonga.

His attacker remains at large. Until Monday, Foulds claimed, there was little investigative effort from the New Orleans Police Department.

But New Orleans police say there wasn’t a lack of interest on their part. They responded to a report of a battery on the night of Oct. 15, but found “neither the victim nor witnesses on scene” and marked the incident as unfounded.

However, the department is now investigating the beating.

It turns out David had already been taken to the hospital before police arrived at the scene, just as the official report stated. Foulds has an emergency medical services report detailing David’s care from 11:21 p.m. to 11:41, when the ambulance dropped him off at the hospital.

Foulds, who didn’t learn of the assault until four days after the fact, said she was dissatisfied with the response from the New Orleans police. Sunday afternoon, she was told an officer would be sent to the hospital to take a report.

Late Sunday night, she said someone phoned her and said: “You are on the list,” but they were busy with the shooting of a police officer.

“They haven’t forgotten about me,” she said she was assured.

On October 15, 2015, around 11:09 p.m., the NOPD received a report of a Simple Battery at the intersection of Decatur and Frenchmen Streets. Initial information provided to the responding officer was that a black male wearing dark clothing was scene attacking a man in the area. The reporting person indicated that the perpetrator had fled in a small black vehicle bearing Louisiana license plate XQT199 that was last seen on Frenchmen Street heading towards Esplanade Avenue. The officer arrived to the location around 11:49 p.m. Upon arrival, the officer did not observe an active scene, a victim or any witnesses. At that point, NOPD Dispatch called back the reporting person who indicated he was no longer at the scene, and he didn’t see anything more than the victim being attacked. At this time, the officer was unaware that the victim had been transported to the hospital. With neither the victim nor witnesses on scene, the incident was marked up unfounded.

After receiving a call from family members about the incident on October 26, 2015, police went to University Hospital to interview the victim and his niece. The victim told detectives he was at the intersection around 11:09 p.m. when he was almost struck by a small black vehicle. The victim stated that he threw his beer can at the vehicle, hitting the roof of the car. The victim said an unidentified black male then exited the vehicle and struck him in the face/head area. The victim said after being punched, all he remembers is waking up and being unable to feel his arms and legs. None of the victim’s property was taken during the incident. The investigation is ongoing.

The incident is documented under #J-30323-15. The report can be requested here: nola.gov/nopd/public-records-requests/

Asked about the delay in contacting David’s family and talking to his niece, Gamble said: “The initial call to NOPD was from a bystander. The first call to NOPD from the victim’s family came in late last night. In between that time, no one notified NOPD that the victim in that initial incident was in the hospital.”

Foulds said her uncle described an incident in which he was nearly struck by a driver who “blew past a stop sign.” David threw his hands up in a “what the heck!” fashion and tossed a can at the car, she said. Other reports said David “flipped the bird” at the driver.

“The gentleman driving the car pulled over,” said Foulds, who attended San Diego State University. “A rather large gentleman.” David doesn’t remember what happened after that apparent road-rage assault, she said.

But someone called 911, and the EMS report recounts vital signs being taken and a saline solution being given.

Sharon L. Jones, a former reporter for The San Diego Union-Tribune, shared an email exchange with a Times-Picayune reporter in which he said at one point: “Nothing you’ve told me constitutes a news story, so there’s nothing to follow up journalistically.”

Jones’ husband, La Jolla photographer Stephen Simpson, has known David since high school in Anaheim. He plans to fly to New Orleans on Tuesday to join his old friend.

“He’s paralyzed from the neck down,” Simpson said. “Who knows what’s going on in his head?”

Simpson said David has been going to the Belly Up music venue in Solana Beach “forever.” He enjoyed hiking at Torrey Pines State Reserve and mountain biking. David gave up surfing but not swing dancing.

David moved here about 1973 and retired nearly 10 years ago as an inspector with Underwriters Laboratories, the safety-assurance company.

Simpson is using a crowd-funding site to collect donations for the expensive medical flight back to San Diego, aiming for $10,000. A Facebook page also was launched, titled Justice for Doug David.

“He can shrug his shoulders, and he’s got feeling in his biceps,” she said. “But other than that, he’s paralyzed.”

Her goal is to get him home to San Diego and into an acute-care facility. She also needs to return to her two children and dog-grooming business.

But she’s not letting New Orleans police off the hook — or the assailant go unpursued.

“I get that we get angry and tempers are elevated,” she said in a phone interview from the hospital. But “now my uncle is laying in a bed. You’d think that someone who is willing to do that — who gets to that level of anger — has probably done it before. And will continue to do it if there’s no action taken.”

She doesn’t accept that David’s behavior on a Marigny street warranted his attack.

“His life has changed forever,” Foulds said, “over something that’s so silly.” 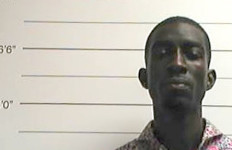 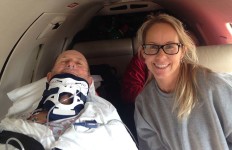 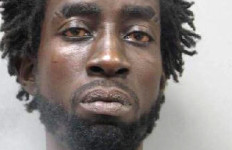