A fortunate pilot walked away from his aircraft uninjured after his small plane made a dramatic belly landing and skidded out of control down a Long Beach Airport runway Wednesday.

The plane apparently lost all electrical power mid-air and the pilot failed in a desperate attempt to lower the landing gear, authorities said.

“Apparently the pilot lost all electrical power and was unable to communicate with the (air traffic control) tower, and he was also unable to get the landing gear to lock and secure in place,” Heflin said.

The 31-year-old pilot of the twin-engine plane had tried to engage the manual release lever but was not successful, authorities said.

“As the plane landed, obviously it collapsed on its belly and basically skidded down the runway,” Heflin said.

The pilot was not injured, and had stepped out of the plane by the time fire officials arrived, he said.

No one else was in the plane, he added. Authorities did not immediately provide any reason why the problems began in the aircraft, nor was there any estimate of what the damage costs will be to repair the plane. 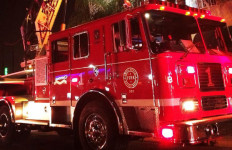