A 44-year-old Santa Monica man who allegedly punched a woman outside a Venice store in an attack caught on video is due back in court next month.

Michael Fino was charged Thursday with a felony count of battery with serious bodily injury, according to the District Attorney’s Office.

He pleaded not guilty at his arraignment and was scheduled to return to the Airport Branch Courthouse Nov. 3.

The criminal complaint alleges that Fino has a 1994 conviction for battery, 2007 convictions for possession of methamphetamine and identity theft and second-degree burglary convictions in 2011 and 2013.

Police said Fino assaulted the woman around 7:30 p.m. Sept. 25 near the intersection of Pacific and Winward avenues. The assault stemmed from an earlier argument between the two strangers, police said.

Police said Fino was speaking to a homeless man and the woman intervened, telling him to leave the man alone. The two later ran into each other in the store and the assault occurred outside of it.

The attack was caught on video, and Fino surrendered to police on Oct. 6. 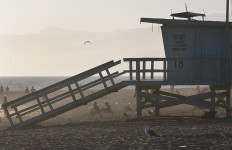