The suspects, who were not publicly identified by name but whose images were released by authorities, allegedly sold the phony loot, which they claimed had been buried at a now-dead man’s home, on Oct. 27 in the 500 block of North Grand Avenue, according to the Los Angeles County Sheriff’s Department.

“The victim was contacted by two Asian male suspects who presented a letter of a man’s will,” according to a sheriff’s statement. “The letter loosely translated this unknown man had buried gold and money at his home. The suspects had since come in possession of the gold and offered to sell the gold to her at a bargain price.”

The woman was given a gold piece to test and it turned out to be real, but the balance of what they sold her was not, detectives said.

Anyone who may have been victimized by the suspects was urged to call (909) 595-2264 to speak with Detective Rosa Avila at the sheriff’s Walnut/Diamond Bar Station.

Police Arrest One of Three Suspects in Torrance 7-Eleven Assault→ 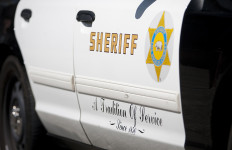