A brush fire sparked by a trash truck near Interstate 10 in Calimesa killed a senior citizen, destroyed 76 mobile homes and blackened 832 acres before crews got it marginally contained Friday.

Another nine homes at the Villa Calimesa Mobile Home Park sustained moderate damage in the blaze, which was reported at 1:58 p.m. Thursday at Sandalwood Drive and Seventh Street, near the Interstate 10 exit ramp, and two people were unaccounted for, according to authorities.

“This was a very rapidly moving fire,” Riverside County Fire Department Division Chief Todd Hopkins said during a late morning news briefing in Beaumont. “It started when a trash truck caught fire, and the burning trash was jettisoned out the back of the vehicle.”

Flames from the burning trash ignited dry grass and spread into the RV park, he said.

An 89-year-old resident of the mobile home park died in the fire. Lois Arvickson’s son told reporters that his mother, who lived alone, was on the phone with him, preparing to leave in her car, when the line went dead.

Sheriff Chad Bianco said the Central Homicide Unit was handling the death investigation, and he noted that two people who resided in the mobile home park remain unaccounted for, though he stopped short of calling them missing. They weren’t identified.

“We’re trying to determine whether there’s criminal culpability,” Bianco said. “We’re investigating to see if we need any type of criminal charges, and we are still in the process of identifying everybody who should have been or lived in the mobile home park.”

County Supervisor Jeff Hewitt, who previously served as the city’s mayor, called it “a very, very difficult day for Riverside County and Calimesa.”

Hewitt said the county Emergency Management Department has issued an emergency proclamation, which the Board of Supervisors is slated to ratify during a special session next Thursday morning to enable the county to apply for immediate state and federal aid.

Mandatory evacuations were in effect south of Seventh Street and east of County Line Road, as well as for nearby Mesa View Middle School, whose students were taken by bus to Calimesa Elementary School in Yucaipa on Thursday.

Bianco said more than 500 homes remain under evacuation, and Seventh Street was shut down between Sandalwood Drive and County Line Road.

“That road closure will be in place for quite some time because of the investigation,” the sheriff said, adding that deputies were providing security around evacuated properties to prevent looting.

Along with the county and Calimesa fire departments, Cal Fire-San Bernardino County and the Yucaipa fire departments were working to encircle the blaze under a unified command. The brusher was 10 percent contained as of 8 a.m. There have been no containment updates since then.

According to the American Red Cross, volunteers were providing round-the-clock assistance to evacuees at the shelter.

“Shelter services include a safe and clean place to stay, food, hydration, comfort kits with personal hygiene items, emotional support and health services,” according to the nonprofit agency. “Those affected by the fire do not need to be staying overnight at the shelter to take advantage of Red Cross services.”

Large and small animals were being accepted at the San Jacinto Valley Animal Campus at 581 S. Grand Ave. Anyone needing help evacuating pets was urged to call 951-358-7387.

A half dozen Cal Fire air tankers and several water-dropping helicopters were summoned Thursday afternoon to make runs on the fire, which expanded into San Bernardino County by 3 p.m. The air support was back in action Friday morning.

According to the South Mesa Water Co., which serves the city of Calimesa, as well as parts of lower San Bernardino County, the agency’s main reservoir is 90 percent full.

“We are pleased to have sufficient supplies helping firefighters to prevent the fire from spreading in our service territory,” SMWC Board President George Jorritsma said.

The sheriff advised anyone who has information about the fire, or who is from the area and may have other concerns, to call 951-776-1099 and use option No. 5.

The Red Cross requested donations to its Disaster Relief fund to help those impacted. Donations can be made at www.redcross.org, or 800-733-2767. 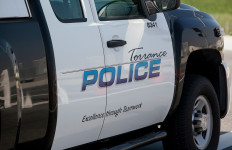