The suspect in the fatal stabbing of a woman believed to be his wife in San Juan Capistrano is scheduled to appear in the Central Jail Court in Santa Ana Thursday.

Sebastian Garcia Ramirez, 50, was booked Wednesday on suspicion of murder after authorities took him to a hospital for an unspecified medical issue, according to the Orange County Sheriff’s Department. Bail was set at $1 million.

Deputies were sent to the 26000 block of Cedar Grove Court about 10 p.m. Tuesday “after receiving multiple calls of a domestic disturbance,” Carrie Braun of the Orange County Sheriff’s Department said.

“When deputies arrived, they found a female victim, approximately 45 years old, inside of a residence suffering from multiple stab wounds,” Braun said.

The woman was pronounced dead at the scene. Her name was withheld, pending notification of her relatives.

Deputies detained Ramirez at the scene, according to Braun.

” Based on initial witness information, investigators believe there is no further threat to the community,” Braun said.

Anyone with information on the killing was urged to call the sheriff’s department at 714-647-7000, or Orange County Crime Stoppers at 855-TIP-OCCS.

Suspect in Fatal Stabbing of Woman Set to Appear in Court in Santa Ana was last modified: January 16th, 2020 by Contributing Editor 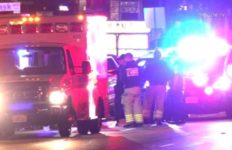