A homeless man who allegedly stabbed a fellow transient and attacked three others near a Garden Grove church pleaded not guilty Tuesday to attempted murder and other charges.

Edwin Sepulveda Margarit, 60, is also charged with two felony counts of assault with a deadly weapon and two misdemeanor counts of brandishing a weapon.

Margarit is accused of stabbing Bihner several times in the chest, as well as lunging at and threatening two other men and a woman who camped out with the victim around the church, Whitney said.

Bihner’s wounds were not considered life-threatening, the lieutenant said.

A June 16 pretrial mandatory settlement conference hearing was scheduled, along with a June 19 preliminary hearing, according to court records. 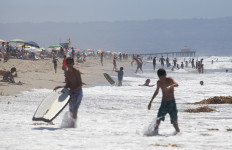