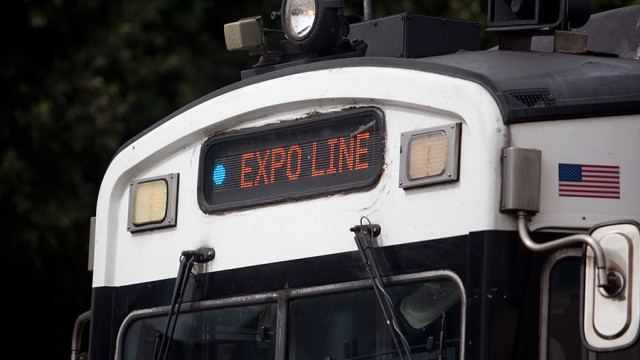 A machine that will soon begin drilling tunnels for a new light rail line through South Los Angeles is named in honor of abolitionist Harriet Tubman, the “conductor” on the Underground Railroad that helped slaves escape bondage.

“Harriet” the boring machine was lowered during a ceremony this morning at the Expo construction yard to mark the beginning of tunnel excavation work for the 8.5-mile light rail line from Crenshaw Boulevard to Los Angeles International Airport.

The name was chosen via a student contest and incorporated into artwork for the machine’s tail shield. It honors the woman remembered for running the 19th century “Underground Railroad” that helped slaves escape to free states and Canada.

The 950-ton German-made tunnel-digging machine, a Herrenknecht AG, is 21 feet in diameter and 400 feet long. It will be lowered in segments and assembled over the next few weeks. Tunneling is expected to last 13 weeks.

The $2 billion light rail project, known as Crenshaw/LAX, will connect the Green and the Expo lines and include eight stations in neighborhoods in Inglewood, the Crenshaw area and near LAX.

Metro board Chair Mark Ridley-Thomas noted that it was fitting for the machine to be named after Tubman.

“I can think of no better way to kick off Black History Month than to name the Crenshaw/LAX Line’s tunnel boring machine after Harriet Tubman, legendary conductor of the Underground Railroad,” said Ridley-Thomas, who is also a Los Angeles County supervisor.

“I am confident that this marvel of engineering now known as ‘Harriet’ will carry on its namesake’s legacy of forging new paths to greater opportunities,” he said.

Mayor Eric Garcetti said the name is reflective of a project that “represents progress and opportunity.”

“The Crenshaw/LAX Line will serve riders who have been historically under-served. And in doing so, it will ease congestion and will get Angelenos to the people and places they love,” he said.