A Los Angeles city councilman on Friday called on Gov. Jerry Brown to fast-track the cleanup of lead and other toxins from a battery recycling plant thought to have contaminated about 10,000 homes in Boyle Heights, East Los Angeles and other communities.

Councilman Jose Huizar said Exide — a lead-acid battery recycling plant in Vernon — was allowed to operate for 30 years under temporary permits issued by the Department of Toxic Substance Control, despite ongoing concerns about pollution from the facility.

Huizar said residents in the communities around the Vernon plant have been exposed to cancer and other disease risks due to the lead, arsenic and other toxins that the facility may have released into their homes for decades.

Exide was forced to close last year, but the toxics control agency continues to work slowly in its efforts to remediate the plant and remove contamination from homes, according to Huizar.

He said the agency has yet to produce a detailed remediation plan, and residents still have not been informed about when their homes will be decontaminated.

“We need the state agency and state government to treat it like the emergency it is,” he said. “Given the dire situation we’re in, there is a lack of urgency that is astonishing.’

He said he is seeking “immediate corrective action to something that is causing deaths and future harm to our children, and quite frankly a lot of fear and a lot of questions that go unanswered.”

Huizar was joined by five of his colleagues in introducing a resolution today that would put the city on record as urging Brown to marshal the financial resources necessary to quickly test and remediate all of the contaminated homes. The resolution will be taken up in committee before it goes to a vote by the full City Council.

Toxics control officials said in a statement they continue “to make the cleanup of contamination created by Exide Technologies a top priority. We are committed to protecting the community and are currently working on a comprehensive plan that will include more resources to expedite our ongoing testing and cleanup.”

The department says it cleaned up the yards of 200 homes, removed 10,000 tons of soil contaminated with lead and tested 20,000 soil samples in the past year.

When asked the anticipated release date of the full remediation plan, toxics control officials said that while they are “continuing to sample and cleanup residences, the department is collecting the information and conducting the analysis needed to complete the next phase of this clean up effort.’

But Huizar said as many as 10,000 homes are contaminated, with each home’s expected remediation costs to be about $49,000.

“Nobody seems to know or want to say where that money will come from,” he said.

While toxics department officials say the cost may come down, and some money is available for clean-ups, the existing funds are not enough to clean up all of the homes quickly, he said.

Exide also is in bankruptcy proceedings, which means the amount of money the company would be able to put into the effort could be limited, according to Huizar.

He also wants to the City Attorney Office to explore “legal remedies” to compel the state and Exide to act faster and direct more funding into the remediation effort. A motion he introduced calling for the City Attorney’s involvement will be taken up in the Energy and Environment Committee.

Boyle Heights resident Terry Gonzalez-Cano said she lives about a mile the Exide site and has had to see many of her family members, friends and neighbors die or suffer from cancer.

“You have no idea the frustration and fear that we feel,” she said.

Gonzalez-Cano, said unlike in Porter Ranch, where residents received free relocation services, similar help “has never been offered to us.”

“We’ve asked before, we’ve asked the state before whether we will be relocated while our properties are cleaned up, and they just don’t answer.”

Gonzalez-Cano told City News Service that as a property owner, it is difficult for her to move away on her own.

“Even if we were to up and move, we’d still have our mortgages,” said the 43-year-old. “We can’t sell because our properties are toxic. No one will buy them. And so we’re stuck financially.”

“People like myself who are sick, and my neighbors and brother who are dying of cancer, we can’t work, so we can’t afford to move anywhere else,” she said.

The councilman’s calls for faster action comes three months after the Los Angeles County Board of Supervisors approved $2 million to help with the cleanup.

County attorneys are assessing their legal options for forcing the state or Exide to act and plan to meet with the board behind closed doors in the next week or two to discuss those alternatives.

Exide agreed last March to close its plant and pay $50 million for cleanup of the site and surrounding neighborhoods.

Of that amount, $26 million is meant to be set aside for residential cleanup. As of August, Exide — which filed for bankruptcy in 2013, had paid $9 million into a trust and another $5 million is due to be paid in by March 2020, according to state officials.

The plant, which produced a host of hazardous wastes, including lead, arsenic and benzene, operated for 33 years without a permanent permit. Efforts to upgrade the equipment and safety procedures repeatedly failed to meet environmental standards.

Lead is not considered a carcinogen by the Centers for Disease Control. However, benzene, arsenic and the industrial chemical Butadiene — all of which were used by Exide — are recognized as human carcinogens.

The neighborhoods of Boyle Heights and Maywood have the highest levels of residential contamination, but the area of exposure stretches to encompass roughly 2 million people, according to county health officials. 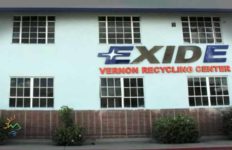