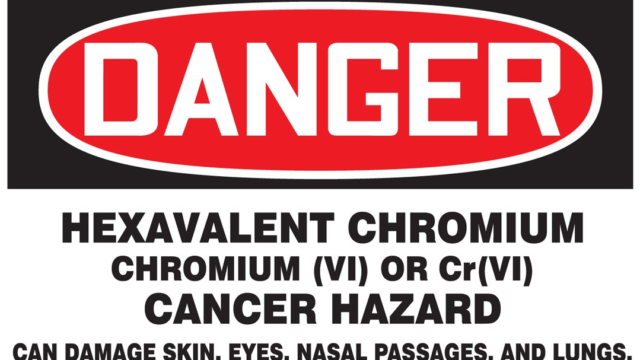 A metal finishing facility in Paramount should have shut down all processing equipment and operations by Friday morning as authorities determined the firm has been spewing a toxic cancer-causing compound into the air.

It’s the fourth time officials forced the shutdown of operations due to the cancer-causing agent at the company.

Aerocraft Heat Treating Co., Inc. at 15701 Minnesota Ave. was ordered by the South Coast Air Quality Management District to curtail such operations by midnight Thursday “because air monitoring data found levels of the compound above a trigger threshold of 1.0 nanograms per cubic meter,” according to a district statement.

The cancer-causing compound is hexavalent chromium.

The level is an average of three samples collected over a period of about a week, according to Sam Atwood, the district’s media relations manager.

“The threshold, agreed to by Aerocraft, was specified in an administrative order adopted by the independent SCAQMD Hearing Board on Dec. 16, 2016,” Atwood said.

“This is the fourth time since the order was adopted that Aerocraft has had to curtail operations due to exceeding the threshold in the order. Prior curtailments occurred from Jan. 19 to Jan. 27; Feb. 14 to Feb. 21; and March 2 to March 7.”

The company won’t be permitted “to resume operations of any equipment with the potential to emit hexavalent chromium until SCAQMD determines that the average of the three most recent samples, collected over about one week, are below 1.0 nanograms per cubic meter,” Atwood said.

Along with the California Air Resources Board, SCAQMD also has, since Dec. 23, monitored air quality at six Paramount schools, where recorded average levels have been below 0.3 nanograms per cubic meter.

The SCAQMD found last fall that Aerocraft and another Paramount metal processing company — Anaplex Corp. at 15547 Garfield Ave. — “were the source of high levels of hexavalent chromium through exhaustive and fast-paced investigation” that included intensive monitoring in an industrial area of Paramount and emissions testing of equipment inside facilities.

Hexavalent chromium is associated with lung cancer when inhaled over long periods, “typically years to decades,” according to Atwood.

Both Aerocraft and Anaplex have been required “to develop health risk assessments and risk reduction plans under the state’s Toxic Hot Spots program to ensure these facilities reduce all toxic air contaminants to health- protective levels,” Atwood said.

“The facilities have already begun to execute many risk reduction measures and will continue to do so over the next few months,” Atwood said.