A federal injunction blocking the shortening of the Santa Monica Airport runway has been lifted, the city’s airport director said, clearing the way for the project that will serve as a precursor to the ultimate shuttering of the airfield.

According to Airport Director Stelios Makrides, U.S. District Judge Ronald Lew lifted an injunction he had earlier granted in response to a lawsuit by two pilots who have challenged the validity of the city’s agreement with the Federal Aviation Administration. That deal calls for the runway shortening and the closure of the airport after Dec. 31, 2028.

The plaintiffs contend the agreement should not have been reached without a public hearing.

“The city is pleased with the court’s decision, which allows it to fulfill its commitment to the community and the FAA,” Makrides wrote Tuesday in a public notification. “… The city will renew work on the runway-shortening project, which it expects to commence within the next week, and will continue to update you on matters relating to that project.”

Under the FAA agreement announced in January, the city will reduce the airport’s runway from 4,973 feet to 3,500 feet, reducing jet traffic and commercial charters by up to thousands of flights over the next 10 years.

In 2014, Santa Monica voters passed a measure mandating that if the airport closes, the only permitted use of the land without a public vote would be parks, open space, recreation, education and/or cultural use. The agreement calls for 227 acres of airport land to be returned to the city once the airport closes for redevelopment as a park.

City manager Rick Cole said in January some of the historic buildings at the airport might be preserved, including the Museum of Flying, but the majority of the land would eventually become a park. 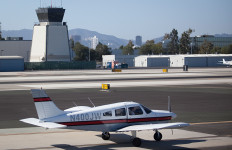