“Spotlight” was selected Sunday as the best movie of 2015 in voting by the Los Angeles Film Critics Association and Josh Singer and Tom McCarthy’s script about The Boston Globe’s investigation into sexual abuse by Roman Catholic priests won for best screenplay.

Michael Fassbender was chosen as best actor for his title role in the biopic “Steve Jobs.” Geza Rohrig was the runner-up for his portrayal of an Auschwitz inmate in the Hungarian drama “Son of Saul,” which won for best foreign-language film.

Charlotte Rampling won for best actress for her role as a woman about to celebrate her 45th wedding anniversary in “45 Years.” Saoirse Ronan was the runner-up for her portrayal of an Irish immigrant in the 1950s in “Brooklyn.”

The best supporting actor award went to Michael Shannon for his portrayal of a callous real estate operator in “99 Homes.” Mark Rylance was the runner-up for his role as imprisoned Soviet spy Rudolf Abel in “Bridge of Spies.”

Alicia Vikander was selected as best supporting actress for her portrayal of a robot with artificial intelligence in the British science fiction thriller “Ex Machina.” Kristen Stewart was the runner-up for her role as the assistant to a famous international movie star (Juliette Binoche) in “Clouds of Sils Maria.”

The Los Angeles Film Critics Association best picture winner has gone on to win the best picture Academy Award eight times since the group began giving awards for films made in 1975.

The most recent double winner was the 2009 Iraq War drama “The Hurt Locker.” Before that, the association’s best picture winner had failed to

repeat at the Academy Awards for 15 consecutive years.

Last year’s critics’ winner “Boyhood” received a best picture nomination, but lost to “Birdman: or (The Unexpected Virtue of Ignorance)” on Oscar night.

Syphilis Scare: What You Should Know→ 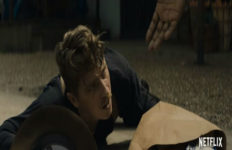