Bill Gates says he recently smelled a “latrine” in Geneva — an artificial stench so foul it made him wince. Fortunately, there’s an app for that.

Actually, it’s a poop-odor-canceling fragrance. The aim is is save millions of people from disease — the ones who avoid latrines in poor countries and go outdoors.

The Microsoft billionaire wrote about a visit to Firmenich, which is testing its creation in India and Africa.

“The approach is similar to noise-canceling headphones which many people use to block out jet engine noise on flights,” Gates writes in his blog. “Likewise, the ingredients in the fragrances developed by Firmenich inhibit the activation of the olfactory receptors sensitive to malodors.

“By blocking the receptors, our brains do not perceive the bad smells.”

Gates was invited to push his nose into a glass sniffing tube and breathe in a horrible “poop perfume.” Then he smelled one of the new odor-blocking fragrances.

“It smelled pretty good,” he said. “There was no evidence of repulsive odor I had experienced earlier. Instead of stinky sewage, sweat and ripe cheese, I sniffed a pleasant floral scent.”

Now the main question is how to distribute the fragrance — as a spray, powder or something else.

“The ultimate goal is to make the product affordable and easy-to-use,” Gates said. “I continue to be amazed by the innovation that’s under way in the field of sanitation.” 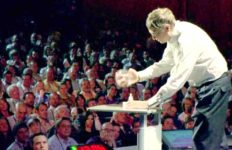 Bill Gates’ $4.6B donation: How many mosquitoes can that kill?→