A star on the Hollywood Walk of Fame honoring two- time Emmy winner RuPaul will be unveiled Friday.

Oscar-winning actress Jane Fonda will join RuPaul in speaking at the 11:30 a.m. ceremony in front of the World of Wonder production offices at 6652 Hollywood Blvd.

World of Wonder produces VH1’s “RuPaul’s Drag Race,” which brought RuPaul prime-time Emmys as outstanding host of a reality or reality-competition program in 2016 and 2017.

The star is the 2,631st since the completion of the Walk of Fame in 1961 with the first 1,558 stars. The ceremony will be livestreamed on walkoffame.com.

“RuPaul is a ruvolutionary performer who brought the art of drag into the American public eye and made it mainstream,” said Ana Martinez, producer of the Hollywood Walk of Fame.

RuPaul settled in New York City in the mid-1980s, becoming a popular fixture on the nightclub scene earning himself the title “Queen of Manhattan.”

RuPaul has produced and hosted the competition series “RuPaul’s Drag Race,” since 2009. He also hosted “RuPaul’s Drag U,” where women are given drag makeovers and “Gay for Play Game Show Starring RuPaul,” both on Logo.

RuPaul has also been a judge on the Game Show Network’s body-painting competition, “Skin Wars.”

RuPaul has appeared in more than 50 films and television shows both in and out of drag including “Crooklyn,” “The Brady Bunch Movie,” “To Wong Foo, Thanks for Everything! Julie Newmar,” and “But I’m a Cheerleader.”

RuPaul’s shimmering star is newest on the Hollywood Walk of Fame was last modified: March 16th, 2018 by Christina Kelley 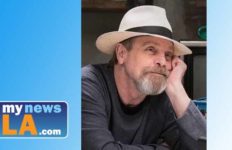 Mark Hamill honored with a star on Hollywood Walk of Fame→