On the same day that news broke of Donald Trump’s favorite tabloid being sued by ex-Playboy playmate Karen McDougal to get out of a $150,000 hush deal with the National Enquirer, his son Don Junior’s alleged extramarital affair again exploded into view.

“The sources also said that Trump Jr. told his wife [Vanessa, now suing for divorce] he planned to leave her for O’Day and that Vanessa was ‘devastated’ by the news,” People magazine noted.

US Magazine, the day after the 2016 election, reported on an O’Day tweet, its criticism and her cryptic clue to an affair.

“I’m embarrassed to be an American,” wrote the Hillary Clinton’s supporter who had met Don Jr. on “Celebrity Apprentice.”

One follower replied: “really? But you was on trump show!!! Why are you mad that the checks stopped coming!”

O’Day responded: “No. my story I didn’t tell is worth millions now 😉 … this doesn’t hurt me, it hurts America.”

A song O’Day released in 2013 is providing some tea leaves to be read, said The Washington Post.

“DJT,” a song on “Between Two Evils,” is steadily gaining new listeners as rumors of an alleged affair between O’Day and Trump … gained traction this week, said the Post.

“People close to O’Day told Us Weekly that the singer and the businessman dated for a few months. Trump, now 40, whose wife, Vanessa, was then pregnant with the couple’s fourth child (they now have five), called off the affair with O’Day, now 34, according to reports, after Vanessa Trump discovered emails between the two.”

The New York Times reports that the Playboy model sued Trump in Los Angeles Superior Court to be released from a 2016 legal agreement requiring her silence, “becoming the second woman this month to challenge Trump allies’ efforts during the presidential campaign to bury stories about extramarital relationships.”

Ex-Playmate Battle Over Trump Alleged Affair Settled: Will She Dish?→ 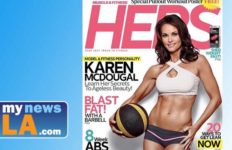