Cat ears and fake ponytails are expected in high supply at the Coachella Music & Art Festival grounds as Grammy-winner Ariana Grande headlines the final day of the first weekend.

Coming off a whirlwind year of tragedy and chart-topping hits, Grande will play for thousands of fans at the Empire Polo Club in Indio, which hosts the Coachella festival. Many of those fans will expect to cheer on the star as she says “Thank U, Next” to all her ex-boyfriends, including the late Mac Miller, who died of an overdose late last year and “Saturday Nigh Live” star Pete Davidson.

Festivalgoers could also see the popstar host millennial-favorite boyband `NSYNC, as the star and her manager playfully suggested on Twitter, according to US Magazine.

The final night of the first weekend is a cherry on top of the music cake with solid performances from a broad spectrum of artists on Saturday and earlier Sunday, including Tame Impala, Billie Eilish, Kacey Musgraces, Childish Gambino, Janelle Monae and Bassnectar.

Other than an early Saturday morning fire that burned two campground bathroom trailers, the Coachella Music & Art Festival has gone on without any other major hiccups.

The fire destroyed one trailer and damaged another, the Riverside County Fire Department said. No injuries were reported.

The cause remains under investigation, but ABC News reported a mechanical unit that heats water for the showers failed and sparked the fire.

For festival fans more interested in art, eye-popping art installations will also be on exhibit at the grounds.

“An integral part of the Festival since its inception, the program of artist installations is unique in scale and ambition, activating and enhancing the `pop-up city’ and experience that Coachella is,” organizers said. “Each year the Festival’s art program establishes new and iconic cultural reference points to distinguish the festival, while contributing to the rapidly expanding visual arts landscape in the Coachella Valley.”

The pieces not only bring whimsical notes to the desertscape, but they also act as important landmarks that help people navigate between acts.

Festivalgoers, each paying anywhere from $400 to $900 apiece, are expected to flood the city to catch all of the world-class art and artists, and despite the availability of the Any Line Shuttle that can carry visitors between the festival grounds and area hotels, major congestion is expected on multiple routes.

The festival will offer around 160 acts this weekend and next weekend at the Empire Polo Field in Indio, where capacity crowds of 125,000-a-day are expected. 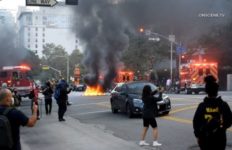