A Santa Monica photographer Thursday sued the makers of the Bloomberg Television show “Bloomberg’s Game Changers,” alleging producers illegally used an original photograph of the co-founders of Google without permission.

Michael Grecco alleges in the Los Angeles federal court filing that his photo was used by Bloomberg L.P. “for commercial purposes in various ways,” including on an episode of “Game Changers” titled “Sergey Brin & Larry Page: Inside the Google Brother’s Master Mission.”

The photo, taken by Grecco in 2001 for the cover of Wired magazine, was allegedly used in a 2010 episode of the “Game Changers” documentary series, which airs on the Hulu subscription video service.

According to the complaint, the defendants “have committed acts of copyright infringement … which were willful, intentional and malicious,” and which subject the episode’s producers to liability for statutory damages of up to $150,000 per alleged infringement. 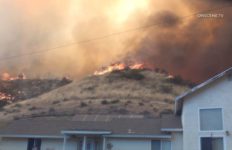