A parade, festival and candle lighting ceremony are planned today to mark the start of the 50th seven-day African-American observance of Kwanzaa.

The 39th annual KwanZaa Gwaride parade will be begin at 11 a.m. at the corner of Crenshaw and Adams boulevards, then head south along Crenshaw to Leimert Park, where a festival will be held.

The 14th annual Kwanzaa Heritage Festival and Block Parade will be held from 10 a.m.-7 p.m. in the street on Degnan Boulevard, near 43rd Street. The festival will include live music, a fashion show, community dancing, crafts, a continuous drum circle, exotic foods and a special children’s village and health screening, according to organizers.

A series of Kwanzaa celebrations at the African American Cultural Center, 3018 W. 48th St., will begin at 6:30 p.m. with an Umoja (Unity) Celebration and Candle Lighting Ceremony, which will include music, cultural expressions, refreshments and Umoja (unity) statements from community leaders, organizers said.

People attending the celebration are asked to bring clean warm clothes and blankets for the needy.

Additional celebrations will be held at the center daily through Friday.

Kwanzaa was created in 1966 by Maulana Karenga, now chair of Africana Studies at Cal State Long Beach, in what he called “an audacious act of self- determination.”

African foods such as millet, spiced pepper balls and rice are often served. Some people fast during the holiday, and a feast is often held on its final night.

The theme of this year’s celebration is “Embracing the Principles and Practice of Kwanzaa: Creating and Celebrating the Good,” Karenga wrote in his annual founder’s message.

The theme was named “in order to reaffirm the centrality of the Nguzo Saba,” Karenga wrote.

“The Seven Principles, the Nguzo Saba, prove their enduring and daily reverence in the life we live, the work we do and the struggle we wage on every front to expand the realms of freedom and justice, peace, security, well-being and other goods in the world,” Karenga wrote.

“In a world in which war is as ‘normal’ as the news and conflict and fighting rage at home and abroad, taking its terrible toll on countless innocent victims, and alienation from others is accepted and explained away, Umojga (Unity) teaches us the oneness of our people, the common ground of our humanity, the interrelatedness of life and the indispensability of family and community in our righteous togetherness in love, work and struggle.” 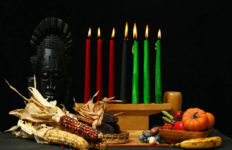 Kwanzaa Marketplace to Be Held at Willowbrook Library→