It looks like the Oakland Raiders have given up on Los Angeles and are moving to Las Vegas, and Nevada’s greatest self-promoting owner of legal brothels will open a house of prostitution dedicated to the NFL team where players and staff will receive 50 percent discounts for sex parties.

Dennis Hof already owns six brothels, including the famed “Bunny Ranch,” and he says his license for a seventh will allow him to open the sports-themed “Pirate’s Booty Sports Brothel” near Las Vegas in 2020. It will feature hookers classified as either “Wide Receivers” or “Tight Ends.”

“I’ve had a license for a seventh brothel near Las Vegas for some time now, but I was waiting for the right time to launch another house of debauchery,” said Hof. He currently operates two legal Las Vegas-area bordellos and four others near the state capital of Carson City, including the “world famous” Bunny Ranch.  “The Raiders coming to Vegas will mean big business for me, so my next sex den will honor the ‘Men in Black’ and their ‘Raider Nation.'”

It wasn’t known what the Raiders or the NFL might make of Hof’s announcement. Los Angeles seems to be full up with NFL teams right now with the Rams and Chargers, so the Raiders have switched their move target to Las Vegas.

Hof already announced that his two Las Vegas-area brothels will offer Raiders players and staff 50 percent discounts for sex parties, and he said the new Pirates Booty Sports Brothel will offer additional VIP amenities “that are sure to sweeten the deal.”
While the National Football League tries to keep it’s players from any public identification with possibly racy environments, Hof recalled at least one former Raiders star frequented the Bunny Ranch.
“Pirate’s Booty will have the magnificent ‘Darrell Russell Hall of Dames,’ named after the late-great Raiders’ defensive tackle and well-known Bunny Ranch patron,” Hof said. “That VIP suite will be exclusively available to Raiders players and other high-profile athletes, and staffed with a collection of cheerleader-garbed working girls called either the ‘Wide Receivers’ or ‘Tight Ends,’ I haven’t yet decided.”
Pro Bowl star Russell died in a car crash in 2005 at the age of 29 after being banned by the NFL for substance abuse.
But Hof was looking on the bright side for his business. “I am happy to claim my place as the official prostitution provider to one of the NFL’s most storied franchises.”
Ever the articulate promoter, Hof urged reporters to contact him for interviews. He pointed out that he’s the author of the book, “The Art Of The Pimp: A Love Story,” and he said he’s “lectured at Oxford, Trinity, the Sorbonne and hundreds of colleges and events worldwide.”
Hookers happy Raiders coming to Vegas: NFL players get half off at new ‘sex den’ was last modified: April 10th, 2017 by Editor 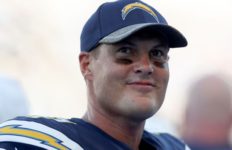