During the middle of a record-breaking Southern California heat wave, about 500-gallons of raw sewage spilled into the water along a pristine Laguna Beach stretch of sand and authorities immediately shut down the area to swimmers.

The ocean at Woods Cove between Center and Moss streets about a mile south of the center of the famed beach resort of Laguna Beach was marked off- limits by the OC Health Care Agency, which says the stretch will remain closed for at least three days.

As the mercury soared to 90 degrees in Laguna Beach Monday — and was expected to top 100 Tuesday — anyone seeking relief from the heat will have to find a different spot for a dip in the cooling ocean water.

Health officials said a blockage in a sewer line owned by the city of Laguna Beach caused the spill.

The water will remain off limits until tests show bacteria levels that meet state health standards. 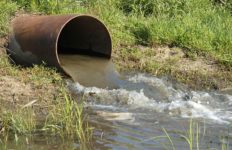 Don’t go into the water; sewage spill near Belmont Pier in Long Beach→