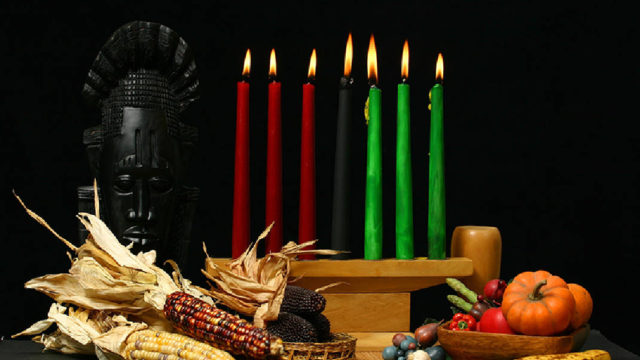 KwanzaaA celebration and candle lighting ceremony are planned Tuesday in South Los Angeles to mark the start of the seven-day African- American festival of Kwanzaa.

The Umoja (Unity) Celebration and Candle Lighting Ceremony is scheduled to begin at 6 p.m. at the African American Cultural Center in South Los Angeles. People attending the celebration are asked to bring warm clothes and blankets for the needy.

A children’s Kwanzaa workshop will be held at the center from 1-4 p.m. Saturday.

The 16th annual Kwanzaa Heritage Festival and Block Parade will be held from 10 a.m.-7 p.m. Saturday on Degnan Boulevard, between 43rd Street and 43rd Place in Leimert Park Village.

The festival will include music, traditional dancing, a drum circle, an international food court, a fashion show, and a children’s village that will include face painting.

Tuesday marks the first day of Kwanzaa, a weeklong celebration of African American heritage and culture. Together, let us celebrate during this joyous time the richness of the past and look with hope toward a brighter future, President Donald Trump said in a statement Tuesday morning. “As families and friends join to light the Kinara, Melania and I extend our warmest wishes for a joyful holiday season and a prosperous year to come.”

Kwanzaa celebrations in Los Angeles actually began Tuesday morning, when people began gathering at Adams and Crenshaw boulevards at 8:45 a.m. in preparation for a parade that was scheduled to set off at 11 a.m. and proceed to Leimart Park in South Los Angeles. The march was expected to feature drill teams, classic cars, drummers, bike and skateboard riders and community activists.

Kwanzaa was created in 1966 by Maulana Karenga, now chair of Africana Studies at Cal State Long Beach, in what he called “an audacious act of self- determination.”

The 2017 theme of Kwanzaa is “Practicing the Principles of Kwanzaa: Repairing, Renewing and Remaking Our World,” Karenga wrote in his annual founder’s message.

“Our ancestors taught that we damage the world and all in it not only by what we do wrong, but also by what we fail to do right,” Karenga wrote.

“And this injuring and wounding of the world and all in it, requires that we constantly repair, renew and remake the world, making it more beautiful and beneficial than when we inherited it.”

African foods such as millet, spiced pepper balls and rice are often served. Some people fast during the holiday, and a feast is often held on its final night.