With billions of dollars in transportation funds at stake, voters Tuesday evening were narrowly defeating a bid to repeal increases in the state’s gas tax and car registration fees.

Proposition 6 would repeal the hikes that took effect in November 2017, raising the tax by 12 cents per gallon for gasoline and 20 cents per gallon for diesel fuel. The increases included in Senate Bill 1, the Road Repair & Accountability Act of 2017, are projected to raise $5.2 billion a year, with the money earmarked for road and bridge repairs.

With about 26 percent of precincts reporting statewide, about 54.5 percent of voters were rejecting the measure.

Gas tax opponents gathered more than 640,000 petition signatures across the state in an initiative drive to put the repeal effort on the ballot. The drive was spearheaded by former San Diego City Councilman Carl DeMaio, and it was funded in part by Republican gubernatorial candidate John Cox.

“The cost of living is already on the increase in California and families are struggling to survive. This is unacceptable,” DeMaio said earlier this year of the gas tax hike. DeMaio and other Prop 6 backers contend that under the gas tax and vehicle registration fee hikes, the average family of four can expect to pay almost $800 more this year alone.

A ballot argument co-authored by Cox in favor of Proposition 6 dismisses contentions that the gas tax funding is critical to fixing the state’s roads and improving transportation in the state.

“Don’t be fooled by opponents who claim there is no money to fix roads if Prop 6 passes,” the ballot argument states. “If the transportation-related taxes and fees we already paid before this new tax increases took effect were spent on transportation, the state would have $5.6 billion annually for transportation needs, without raising taxes.”

Opponents of the measure have blasted the proposition, insisting that repealing the gas tax would eliminate funding for transportation projects statewide. In Los Angeles, a recent City Administrative Office report estimated that eliminating SB1 funding would cost the city $34.5 million in funding this fiscal year alone, while the county could lose more than $1 billion.

Gov. Jerry Brown, who championed the gas tax, has been vocal in his opposition to Proposition 6.

“The test of American strength is whether we defeat this stupid repeal measure which is nothing more than a Republican stunt to get a few of their losers returned to Congress,” Brown said during a recent event at Los Angeles Union Station. “And we’re not going to let that happen.” 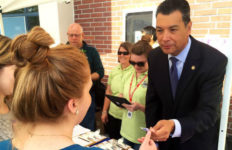