A jury Friday awarded $5.7 million in damages to an Irvine PTA mother and her family in their lawsuit against two disgraced former attorneys convicted of planting drugs in her car in a revenge plot for a perceived insult against their son.

Kelli Peters, her husband, Bill, and their now-15-year-old daughter, sued Kent Easter and his ex-wife, Jill, who changed her name to Ava Everheart. The lawsuit claimed emotional distress and false imprisonment.

Jurors deliberated for about an hour before reaching the verdicts.

Easter, 41, who represented himself in the trial, told City News Service that the amount awarded to the Peters’ was “mind-boggling,” but he declined further comment. Everheart testified in the trial Thursday, but was not at the courthouse Wednesday when the trial began or today.

“She is very happy that justice was done for her,” Marcereau said. “It was never about the money. It was standing up to people who were bullies really.”

Easter declared bankruptcy before the trial and was granted a stay on the civil suit proceedings, but Marcereau and his legal team got it lifted.

“He tried every trick in the book, but we were there for it and had an answer for it,” Marcereau said.

Easter said he doesn’t have the means to pay a large judgment. He is trying to get work as a legal consultant because his law license was suspended, but it’s not much and he has been living with his parents while caring for the couple’s three children, he told City News Service.

The conflict between the Peters and Easters started in February 2010 when Everheart went to pick up her 6-year-old son from an afterschool program at Plaza Vista School in Irvine. She couldn’t find her son right away, so she confronted Peters, who was in charge of the program.

Peters suggested that her son was “slow” to line up with the other kids for the parental pickup, a comment the PTA leader has said was meant as an innocuous observation, but Everheart took it as an insult to her boy’s intelligence, Marcereau said in closing arguments.

“This is all over a perceived insult,” Marcereau said.

Kent Easter, who was a partner in a prestigious Orange County law firm, and his wife, who also had a law license but did not practice, began a campaign to get Peters fired from her volunteer post, and when that failed they used their legal acumen to harass her, Marcereau argued.

Everheart stood outside the school handing out fliers to parents that were critical of Peters, and then they filed a police report claiming their son was “falsely imprisoned,” but that also went nowhere, Marcereau said.

Easter argued he never served the Peters with the lawsuit, but it remained on docket for six months, Marcererau said.

“Then we had a restraining order” that alleged death threats and stalking against Kelli Peters, but that was also rejected, Marcereau said.

Finally, the Easters had marijuana, Vicodin and Percocet planted in Peters’ car, and Kent Easter went to a hotel near his work, picked up a payphone and dialed police. Using an Indian name and sometimes a phony accent, Kent Easter told police Kelli Peters was driving erratically.

“They’re not just trying now to get her fired. They’re trying to ruin her life,” Marcereau said in his closing argument.

It was unclear if Kent Easter joined Everheart in planting the drugs, Marcereau noted. An Irvine police investigator testified that Kent Easter’s cellphone was “pinging” off a cell tower near the crime scene, Marcereau said.

Peters’ attorney argued that his clients lived in a state of fear for that year and he asked the jury to tabulate what a lost year of misery was worth. Kelli Peters suffered from headaches, clumps of her hair fell out from worry and she lost weight, Marcereau said.

Her husband suffered panic attacks and their daughter was too afraid to sleep alone and had to transfer schools, Marcereau said.

Marcereau argued that Kent Peters “quit-claimed” his $1 million home in Irvine to his father-in-law after his arrest and alleged that the defendant was “hiding” assets. He argued that Easter was even pretending to be down-and- out by wearing a pullover sweater to court instead of a suit.

As an attorney who represented “fraudsters,” Kent Easter was “trained at the shell game,” Marcereau said.

Marcereau asked for $8.5 million in damages.

Easter told jurors, “I never should have hurt Kelli Peters,” and he acknowledged that he would have to pay some sort of damages.

Easter downplayed Peters’ stress and accused her of “embellishments and exaggerations.”

“I’m not saying she was not upset, but this is not a million-dollar case,” Easter argued.

Easter argued there were seven “real exaggerations” in Peters’ testimony. For instance, she said she heard a police helicopter at the scene when she was detained, but that turned out to be wrong, Easter said.

Easter also challenged her claim that she was detained at the scene for two hours, saying it was closer to 40 minutes. Easter argued that suspicion on Peters was fairly quickly thrown off and she was cleared about five weeks later when DNA tests did not match genetic material on the baggie of drugs.

Peters went back to her job as a volunteer the day after the incident, so she couldn’t have felt too humiliated, Easter argued.

If she felt terrified of the Easters, why didn’t she move, Easter argued. He pointed out that his family would occasionally run into the Peters’ in the neighborhood and there were no incidents.

Kent Easter also argued no medical experts testified about Peters’ anxiety, and that her claims of high stress came just from her testimony.

“You haven’t heard from any counselors or therapists about lasting harm” to Peters, Easter argued.

Easter also said that the officer who investigated her handled her with kid gloves, never taking her down to the station, getting a mugshot or even jailing her.

Easter also argued he has already been punished by having to serve time behind bars and losing his law license and career.

“I’ve already paid dearly,” Easter said. “I’ve lost my law license and career… and the law says you have to take that into account… I’m not able to pay punitive damages.

“I’m a 41-year-old still living with my parents now… I’ve lost everything I’ve ever had but my family and I don’t see the point of being punished further, but that’s up to your judgment.” 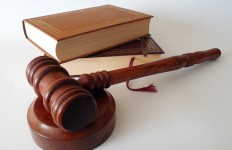