A 32-year-old man was shot and critically injured by police today in the Civic Center area near the main courthouse.

The shooting occurred just before 9:30 a.m. near 600 N. Ross St., in the vicinity of the fountain in the Civic Center close to the Plaza of the Flags and the Central Justice Center.

Two officers who patrol the area made contact with the suspect, whose name was not immediately released, and a “struggle ensued,” according to Santa Ana police Cpl. Anthony Bertagna.

The suspect, who was shot in the upper body, was taken to Orange County Global Medical Center in Santa Ana, where he underwent surgery and was listed in critical condition, Bertagna said.

Linda Gonzales, a transient who regularly sleeps near the Plaza of the Flags, said she was reading a newspaper when she heard gunshots.

“I heard three gunshots and somebody yelling, ‘My gun,’ and that’s it,” Gonzales said.

Gonzales said she did not know the suspect well, other than that his first name is Richard and he’s a “very quiet person.”

“He was riding his bike through here and he had no shirt on,” Gonzales said.

Bertagna said a bicycle was found at the crime scene, but it’s unclear whether the suspect was riding it before the shooting. It is a violation of the city’s code to ride a bike through the Civic Center area, Bertagna said.

Gonzales praised the police, saying many officers have helped her out.

“They help me through a lot of stuff,” she said. “They’re all good police officers.” 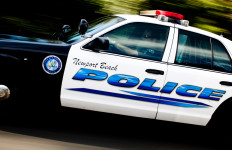 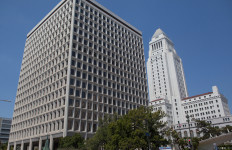 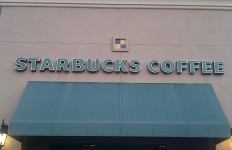