Peter Henrich Conrad Reinert, 63, of Laguna Beach pleaded guilty Wednesday to fleecing investors and using their money to purchase luxury cars, pay sales commissions and to wire money to an account in Poland, according to the U.S. Attorney’s Office.

Reinert told investors his Fazer Technologies firm was working on a product that would boost gas mileage for cars up to 150 miles per gallon, federal prosecutors said. He also told investors that another one of his companies — Global Encryption Imaging Corp. — was developing anti- counterfeiting technology for state-issued identification cards, and in the third scam, he told victims that another company — Income from Waste Corp. — was producing technology to turn used tires into oil, according to the U.S. Attorney’s Office.

Reinert enticed some investors with claims that Tesla and General Electric had shown interest in Fazer’s product, and he also falsely claimed that Tesla stole Fazer’s technology, court papers show. 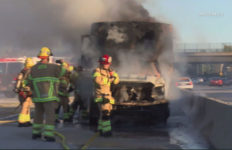