Always Checking “was pulled up by jockey Jesus Ayala shortly after the start of a 330-yard race then euthanized as a result of injury,” said Mike Marten, spokesman for the California Horse Racing Board.

Los Alamitos is currently running nighttime thoroughbred and quarter-horse races. The track had some trouble filling race cards during its most recent thoroughbred meet June 29-July 14, in the wake of controversy over the deaths of 30 horses this winter and spring at Santa Anita.

Races were canceled three times during the meet’s first few days due to shortage of entries, partially caused by stricter new regulations that govern which horses are deemed healthy enough to race.

Last month, a 4-year-old racehorse died after suffering a shoulder fracture in a race at Los Alamitos Race Course. Cuervo Foose, a gelding, died sometime during the week of July 16-21, according to a spokesperson for the track. 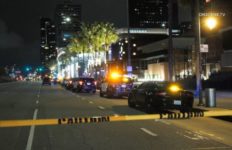