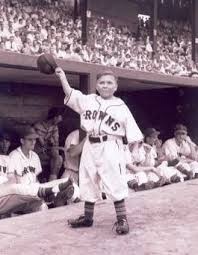 A celebration of the 64th anniversary of the pinch hitting appearance by 3-foot, 7-inch Eddie Gaedel with the St. Louis Browns will be held Wednesday night in South Pasadena.

The celebration at Griffins of Kinsale, 1007 Mission St., will include introductory remarks by filmmaker Jon Leonoudakis, president of the Eddie Gaedel Society, Los Angeles Chapter #3, and a speech by former Los Angeles Times sports reporter Bill Christine, who, as a 13-year-old, was part of the crowd announced at 18,369 at St. Louis’ Sportsman’s Park when Gaedel made his pinch-hitting appearance.

There will also be a $2 Eddie Gaedel trivia contest. All attendees at the 7:30 event will receive a special pin courtesy of the Eddie Gaedel Society, Spokane Chapter #1.

The festivities will adhere to the society’s motto, “Small talk, short speeches and half-pint beers.”

Gaedel’s appearance was the brainchild of Browns owner Bill Veeck, a member of Baseball’s Hall of Fame, who was perennially seeking ways to boost interest in the team with perennially the lowest attendance in the American League.

There was no advance publicity for Gaedel’s appearance. The Browns did promote the celebration of the 50th anniversary of the American League held between games of the doubleheader and drew their largest crowd of the season.

Gaedel jumped out of a 7-foot birthday cake during the celebration.

In the bottom of the first inning of the second game of the doubleheader against the Detroit Tigers, Browns manager Zach Taylor signaled for a pinch hitter for leadoff hitter Frank Saucier and the 26-year-old Gaedel strode to the plate, wearing a uniform with the number 1/8 that regularly belonged to 9- year-old batboy Bill DeWitt Jr., now the principal owner of the St. Louis Cardinals.

According to an account prepared by the Society for American Baseball Research, home plate umpire Ed Hurley yelled “What the hell?” Taylor presented Gaedel’s contract to Taylor, who after some confusion, called for a pitch.

Because of Gaedel’s small strike zone, Tigers pitcher Bob Cain didn’t come close to throwing a strike. Gaedel walked on four pitches, took his base and Jim Delsing, the father of professional golfer Jay Delsing, pinch-ran for him.

Gaedel died in 1961 at the age of 36, the victim of a beating in his native Chicago.

The event is organized by the Los Angeles Chapter of the Eddie Gaedel Society and the Baseball Reliquary. The society was founded in 2011 in Spokane, Washington to annually honor Gaedel, whose lifetime 1.000 lifetime on-base percentage remain a source of inspiration to all those who dream of making it the major leagues.

The Monrovia-based Baseball Reliquary, founded in 1997, bills itself as a nonprofit educational organization dedicated to fostering an appreciation of American art and culture though the context of baseball history and exploring the sport’s unparalleled creative possibilities. 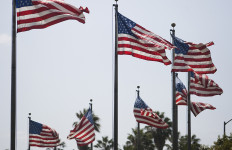 Events Held Across Southland to Mark Anniversary of 9/11 Attacks→