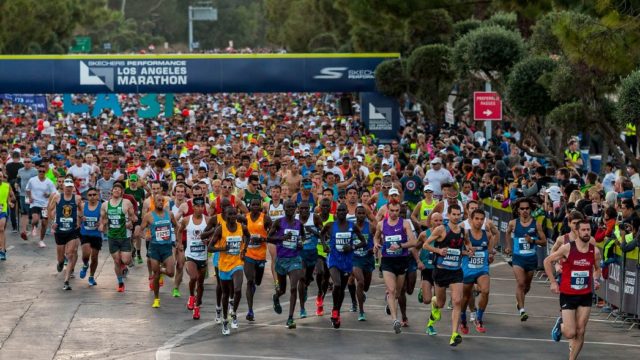 The 32nd annual Los Angeles Marathon got underway Sunday with approximately 25,000 runners from all 50 states and a race-record 63 nations entered.

There are more than 40 on-demand Snapchat Geofilters along the 26- mile, 385-yard course, enabling runners and spectators to apply marathon-themed graphic overlays to their snaps before sending them to their friends in what is being billed as the “longest on-demand Geofilter initiative.”

Click to find out which streets are closed to vehicle traffic.

This is the first time the race has been run since the Expo Line was extended to Santa Monica. Metro is increasing service to every nine minutes with three-car trains to accommodate what is expected to be significantly higher ridership than usual.

Another first for this year’s race is “Rivalry Row” on Mile 20 at Sepulveda Boulevard and Ohio Avenue in the Sawtelle district where students from UCLA and USC will attempt to coax runners to their side of the street.

Los Angeles Police Department Officers Marty Pacheco and Jesse Rubalcava are running the race with Hollywood Police Activities League youth and cadets, who have been running together for three times a week over the past eight months.

“It’s become a truly life-changing experience,” Pacheco said. “I’m so proud of how our kids have helped motivate each other to keep going.”

A group of 10 firefighters and four police officers from Berlin have entered the race to commemorate the 50th anniversary of the Sister City relationship between their city and Los Angeles.

The remainder of the 16-person team consists of Arthur Hightower, the Chargers senior director of player engagement, four members of the Chargers Girls, Chargers.com reporter Hayley Elwood and eight fans.

Dozens of volunteers are dressed in purple between mile marker 21 and 22 in Brentwood at the Purple People Party Cheer Station in an attempt to raise awareness for pancreatic cancer.

They are joined by fans of the actor Richard Hatch will be dressed in sci-fi costumes commemorating the star of the original version of “Battlestar Galactica,” who died from the disease last month.

The race’s 95 charity partners are expected to raise $4 million for their causes from the race.

The race is being run for the eighth consecutive year on the “Stadium to the Sea” course from Dodger Stadium to Ocean Avenue and Santa Monica Boulevard in Santa Monica.

Kirui is seeking to become the first man to win the race in back-to-back years since Wesley Korir of Kenya won in 2009 and 2010.

African women have won five of the last seven races, with runners from the former Soviet Union winning the other two times. A U.S. runner last won the women’s race in 1994.

The race has a purse of $100,000, with equal prize money for men and women. The top five male and female finishers will receive prize money.