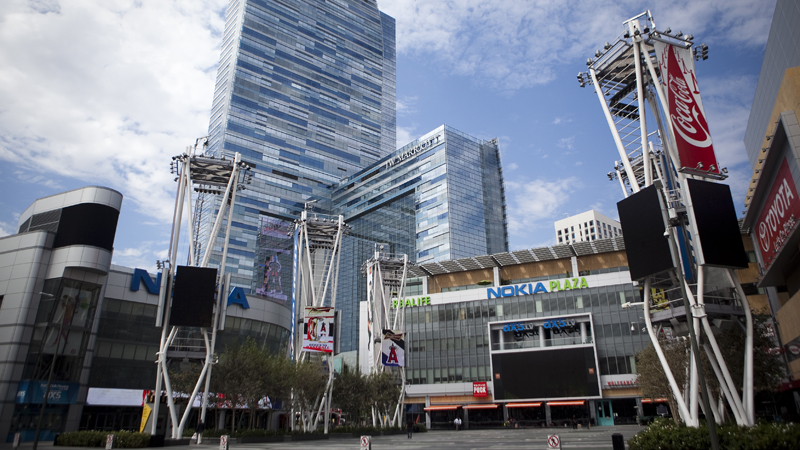 Five years after the grand opening of the JW Marriott L.A. LIVE, AEG announced plans Thursday develop a 755-room expansion of the hotel in hope of creating “the west coast’s premier meeting and conference destination” and attracting more convention attendees.

“AEG’s continued investment in our downtown will further the momentum created by the development of STAPLES Center and L.A. LIVE,” Los Angeles City Council President Herb Wesson said in comments included in an AEG statement.

“The continuation of this enormously successful public-private partnership will signal the launch of the much anticipated renovation of the Convention Center while furthering Los Angeles’ international reputation and prominence.”

The new 38-story tower will occupy 60,000 square feet at the northeast corner of Olympic Boulevard and Georgia Street.

“Taking advantage of the proposed connecting links to the Los Angeles Convention Center, STAPLES Center and Nokia Theatre L.A. LIVE, convention and hotel guests will have convenient access to the full range of amenities offered at L.A. LIVE including 19 world-class restaurants …,” the AEG statement said.

“This latest project represents over $500 million in additional investment by AEG in downtown Los Angeles and is projected to create more than 3,500 construction-related jobs and more than 500 full and part time jobs when the new tower opens.”

The new hotel tower will be directly connected to the existing 878-room JW Marriott L.A. LIVE and 123-room Ritz-Carlton Los Angeles hotels by means of a bridge across Olympic Boulevard.

“When combined with all of the current offerings of L.A. LIVE, this new development will truly elevate the campus to become one of the preeminent meeting and convention destinations in the world,” said Los Angeles Tourism & Convention Board President & CEO Ernest Wooden Jr.

“Additional hotel inventory, especially around the Convention Center, is critically important to our ability to attract larger conventions and this 755-room expansion is a positive step forward to help ensure our inventory remains competitive.”

AEG intends to proceed with the project as soon as it completes arrangements with the city and Marriott. Construction is intended to start in late 2015 or early 2016, with the new hotel rooms and facilities scheduled to open in 2018.