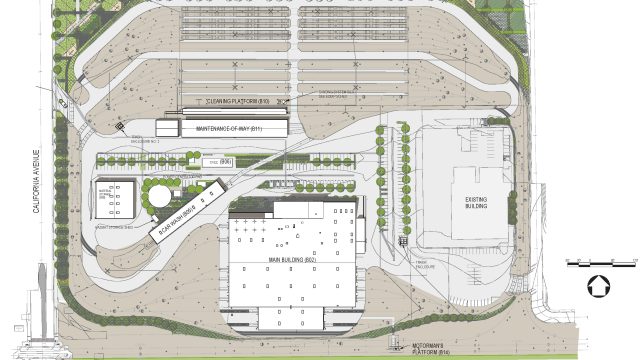 A light rail maintenance shop and operations center was dedicated in the San Gabriel Valley Saturday, as passenger rail tracks are being built all the way from Azusa to the Pacific Ocean.

About 200 people will work at the Monrovia facility, and its 132,000- square-foot Main Shop Building will service up to 84 light rail vehicles from the county’s growing light rail fleet.

The Gold Line Operations Campus is an was described as an integral part of the six-station, 11.5-mile Foothill Gold Line light rail extension from Pasadena to Azusa, currently nearing completion.

Construction has just started on a downtown tunnel to connect the Gold Line to the Expo and Blue lines, and when it is done, trains from Azusa will travel to Long Beach, and Expo Line trains can be serviced at Monrovia.

“Today, we celebrate an important milestone on the project that will allow trains to start being commissioned to the facility in advance of us completing the six station light rail extension three short months from now,” said Foothill Gold Line Board Chairman Doug Tessitor in prepared remarks.

The repair shop is projected to use 35 percent less water and 33 percent less electricity than a typical building of its kind.

To accelerate construction, Proposition R sales tax funds were funneled to the Gold Line Construction Authority, which is charge of Gold Line construction and will transfer ownership to Metro when the tracks and center are finished. That agency was created in 1998 by the California Legislature, and it completed the first segment of the line from Los Angeles to Pasadena in 2003, also on time and under budget.

Its next task is to extend the tracks further east, to Montclair.

The Pasadena to Azusa segment is fully funded by Los Angeles County’s Measure R. It will be completed in late-September 2015 and turned over to Metro for testing.