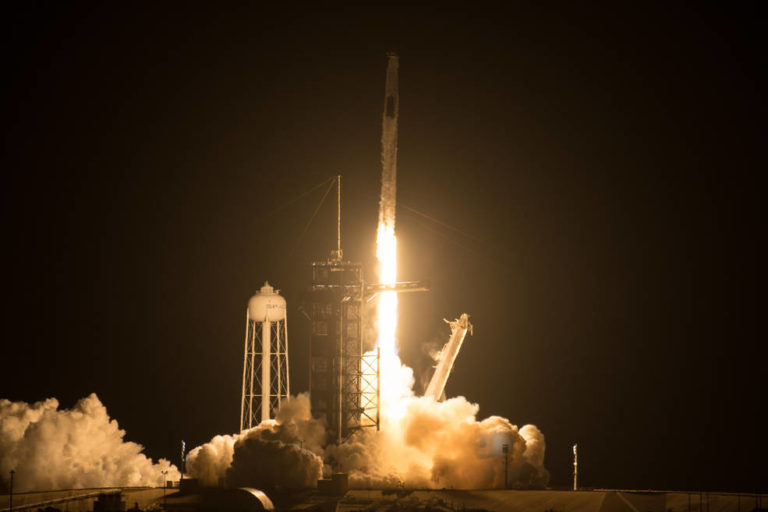 Hawthorne-based SpaceX successfully launched another group of astronauts into orbit early Friday morning for an eventual rendezvous with the International Space Station — becoming the first launch involving a previously used spacecraft and rocket.

“3.. 2.. 1.. and liftoff! Endeavour launches once again,” NASA tweeted just after 2:49 a.m. PT, as the rescheduled launch came off on time and without any problems.

“Four astronauts from three countries on Crew-2, now making their way to the one and only @Space_Station.”

The launch marked the second time the Endeavour has carried astronauts on a journey toward the International Space Station.

The craft was used last summer in the historic flight of two astronauts that marked the first manned mission to launch from U.S. soil since the space shuttle program was retired.

SpaceX last November sent another four astronauts to the space station in a separate Dragon spacecraft, dubbed Resilience. That crew is still aboard the international orbiting outpost, scheduled to return to Earth next week. The first stage of the Falcon 9 rocket that propelled that crew on its mission was used again in Friday’s launch.

Last summer’s launch of two astronauts was technically considered a demonstration mission to test the capabilities of the Dragon spacecraft. So November’s launch of four astronauts was dubbed the Crew-1 mission, or Dragon’s first fully operational flight. Friday’s launch, therefore, is dubbed Crew-2.

McArthur, who grew up in Northern California, is a UCLA graduate in aerospace engineering, and she earned a doctorate in oceanography at UC San Diego, where she was a researcher at the Scripps Institution of Oceanography.

When the crew arrives, both SpaceX Dragon spacecraft — Endeavour and Resilience — will be concurrently docked at the station for the first time.

The Crew-1 astronauts — NASA’s Michael Hopkins, Victor Glover and Shannon Walker and JAXA’s Soichi Noguchi — are scheduled to depart the station April 28 aboard Resilience, splashing down on Earth about 5 1/2 hours later.