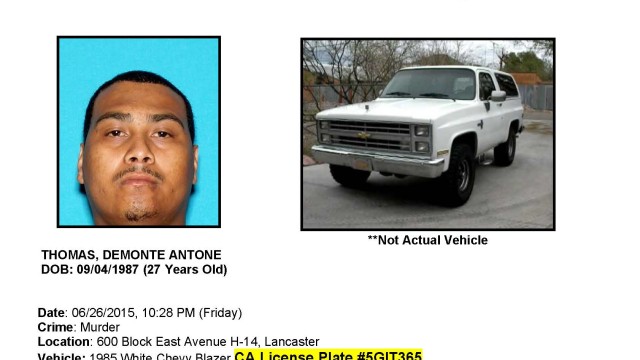 Sheriff’s homicide detectives Thursday released a photo of a suspect being sought for allegedly killing a 22-year-old man after running over the victim’s dog.

Michael Davis was gunned down in the 600 block of East Avenue H-14 in Lancaster on June 26. That day, the victim’s poodle was run over by a vehicle in a parking lot at the location, according to Deputy Ryan Rouzan.

Davis chased down the suspect, identified as Demonte Antone Thomas, and said Thomas needed to help pay for any veterinary expenses, but Thomas sped off, according to Rouzan.

Thomas, 27, is accused of returning to the scene and shooting Davis at least six times, the deputy said. The victim died at the scene, leaving behind a pregnant girlfriend and a son.

Thomas was believed to be driving a white 1985 Chevrolet Blazer, California license plate 5GIT365, according to sheriff’s investigators, who said he should be considered armed and dangerous.

Anyone with information about his whereabouts should call detectives at (323) 890-5500.