Human remains were found near an on-ramp to the San Bernardino (10) Freeway in Claremont.

Claremont Police were notified Monday by the California Highway Patrol of the remains, which were found by a crew of workers who were conducting roadside cleanup near the Indian Hill Boulevard on-ramp to the freeway.

The CHP responded and confirmed that the bones were human and called Claremont police to investigate, according to Claremont Police Department Lt. Mike Ciszek.

Officers and detectives responded to the scene, cordoned off the area and requested the assistance of Los Angeles County Sheriff’s Department, Ciszek said.

The Los Angeles County coroner’s office removed the remains from the scene, according to Ciszek.

The cause of death and identity of the victim were pending analysis by the coroner’s office. 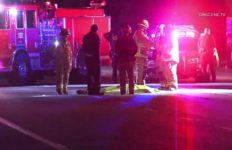