Superior Court Judge Ronald S. Coen threw out a subpoena from Knight’s attorneys seeking bank records for Dr. Dre — also known as Andre Young — that Knight contends are critical in his defense in his upcoming murder trial, which is set to begin next April in a downtown Los Angeles courtroom.

In court papers, Knight’s attorneys contend that the check was “signed by Andre Young, aka, ‘Dr. Dre.”‘

Young’s attorneys countered in their own court papers that “the plot alleged by Knight in his declaration is absurd on its face” and that “the information requested by the subpoena does not tend to show that any such plan existed.”

“Young’s financial records are wholly irrelevant to Knight’s defense in this case,” Young’s attorneys wrote in their court filing.

Knight, 52, is charged with murder, attempted murder and hit-and-run for using a pickup truck to allegedly run down Terry Carter and Cle “Bone” Sloan in the parking lot of Tam’s Burgers in the 1200 block of West Rosecrans Avenue on Jan. 29, 2015. Carter died and Sloan survived his injuries.

His attorneys have contended that Knight was ambushed and was trying to flee for his life, writing in court papers that the bank records were “material to his defense” and that Knight “needs these documents to prove that his fear and that his actions were justified.”

In a two-page, signed declaration, Knight contended that a private investigator who worked for him met with him in jail in July 2016 to discuss the progress of his case and “showed me a photocopy of a check in the amount of $20,000” from the “checking account of Andre Young (aka Dr. Dre).”

“It is my information and belief, that this check is critical in the defense of my case, in that this check tends to show that at least one of the individuals present at the scene in the above entitled case, had been paid a substantial amount of money to participate in my murder,” Knight wrote in the declaration, adding that it justified “my actions in attempting to flee the scene.”

Knight wrote in the declaration that the private investigator has subsequently “refused to turn over any investigative reports or materials, including the aforementioned check.”

Two other criminal cases against Knight are also pending.

He is charged in one case with stealing a camera from a female paparazzo in September 2014, and in another case with threatening the director of the film “Straight Outta Compton” in August 2014. 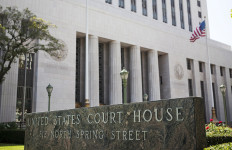