Sheriff’s detectives Friday released surveillance video of a suspect in the act of two armed robberies at the same convenience store in Palmdale, where he assaulted and held a gun to the head of an 83-year-old woman during one of them.

The robberies occurred about 8 a.m. on Nov. 20 and about the same time on the morning of April 5 at a store in the 38400 block of 35th Street East, according to the Los Angeles County Sheriff’s Department.

“In both incidents, the suspect entered the same store, assaulted a customer and then pointed a black handgun at the clerk while demanding money,” according to Deputy Trina Schrader of the Sheriff’s Information Bureau. “He then fled the location with a large sum of U.S. currency.”

During the November robbery, he used the handgun to assault a male victim who sustained minor injuries and was treated at the scene. A female clerk was not injured. The suspect then fled in a white 1990s-model Chevrolet Suburban, Schrader said.

The same clerk was present during the April robbery, but again was not hurt. The 83-year-old woman who was assaulted complained of pain. The suspect fled on foot, Schrader said.

The gunman, who should be considered armed and dangerous, was described as black, about 6 feet tall and weighing 200 pounds. He wore a black mask and had an earring in his right ear.

Anyone with information about the crimes or the suspect’s identity and whereabouts was urged to call the sheriff’s Palmdale Station at (661) 272-2400. Anonymous tips can be submitted through Crime Stoppers by calling (800) 222-TIPS. 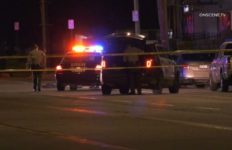