Gov. Jerry Brown Friday reappointed two Southlanders to the California Commission on the Status of Women and Girls.

Katherine L. Buckland, 55, of Los Angeles, and John M. Erickson, 32, of West Hollywood, have served on the panel since 2015 and 2017, respectively. Their reappointments to the $100-per-diem posts require Senate confirmation.

Buckland has been the executive director of the Writers Guild Foundation since 2013, and prior to that held the same title at the California Women’s Law Center for seven years. She held several positions at the Los Angeles City Attorney’s Office from 2001 to 2005 and 1989 to 1991, including communications director and deputy city attorney in the Criminal Branch, and held various titles at the Democratic National Committee from 1991 to 1996, including New York state political director, director of women’s outreach, deputy political director for California and California director.

Erickson this year became the director of public affairs at Planned Parenthood Los Angeles, after spending a year as a legislative representative at Los Angeles World Airports and serving in several positions for the City of West Hollywood from 2011 to 2017, including as a deputy to Councilmember Abbe Land. Erickson is president of the Hollywood Chapter of the National Organization for Women and earned Master of Arts degrees in applied women’s studies and women’s studies in religion from Claremont Graduate University.

Also Friday, the governor reappointed Jesus Dominguez, 56, of Santa Clarita, to the Physical Therapy Board of California, where he has served since 2014, and Tracey St. Julien, 59, of Los Angeles, to the Board of Juvenile Hearings, where she has been a member since 2017.

Dominguez this year became an associate professor of clinical physical therapy and director of admissions in the Division of Biokinesiology and Physical Therapy at the University of Southern California, where he was an assistant professor for 14 years. He was an assistant professor at Cal State Los Angeles from and 2002 to 2004 and a physical therapist at the University of Southern California Keck Hospital from 1996 to 1998.

His position does not require Senate confirmation. The compensation is $100 per diem.

She served as chief of staff in the office of Assemblyman Curtis Tucker Jr. from 1988 to 1996.

St. Julien’s position requires Senate confirmation, and the compensation is $147,778.

Man Barricades Himself in Indio Home For Several Hours→ 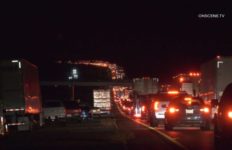 I-15, Other Roads Closed After Heavy Rain and Snow Hit Southern California→