Stan Lee will have to wait until next month for a hearing on his request for an extension of a temporary restraining order previously obtained on behalf of the comic book legend against his partner and business manager, a court official said Thursday.

The TRO will remain in effect until the upcoming hearing, Freund said after the brief court session.

Morgan must stay at least 100 yards from Lee, 95, his daughter and his brother. Lee’s court papers allege Morgan has been contacting the relatives daily demanding they pay him money or assist him in gaining control of Lee’s finances.

Morgan, who was serving two years probation for making criminal threats in an unrelated case, was arrested June 11 and released that evening on $20,000 bail.

According to court papers, law enforcement and Adult Protective Services officials went to Lee’s home on May 30 to perform a “welfare check.” Morgan then reportedly arrived at the residence and security guards refused to let him in, while Lee was being interviewed by authorities. At that point, Morgan “made a false 911 call, claiming that there were three unidentified burglary suspects in his 95-year-old friend’s home who had locked everyone out of the house,” according to the court documents.

Later that night, Morgan called 911 again, accusing a security guard at the home of assaulting him and Lee with a deadly weapon, according to court documents.

Lee, the man behind Marvel superheroes such as Spider-Man, the Fantastic Four, Iron Man and Black Panther, requested a order against Morgan, who he had days earlier insisted was his sole partner and business manager. The court documents allege in part that Morgan isolated Lee from his family and other associates, and moved him out of his home earlier this month and into a condominium. 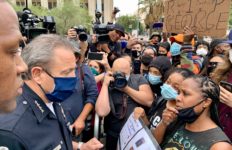