A judge said Thursday he will decide in October if Kim and Khloe Kardashian and Kris and Kylie Jenner can seek dismissal of defamation allegations filed against them by Blac Chyna, who alleges the four women falsely claimed she physically abused former boyfriend Rob Kardashian.

Los Angeles Superior Court Judge Randolph Hammock said he would not rule Thursday on a motion brought by Chyna’s lawyers, who want the anti-SLAPP motion filed Aug. 9 stricken on grounds it should have been brought sooner by the Kardashian-Jenner lawyers. If the four women are allowed to proceed with the motion, it would limit the Chyna lawyers’ ability to obtain discovery in their client’s underlying case up until the dismissal motion is decided and possibly beyond if the ruling is appealed.

But Hammock said that even if the anti-SLAPP motion is allowed to move forward to a hearing, Chyna’s lawyers can still seek discovery on a limited basis.

An anti-SLAPP — a strategic lawsuit against public participation — is a complaint intended to censor, intimidate, and silence critics by burdening them with the cost of a legal defense until they abandon their criticism or opposition.

Chyna, 30, and Rob Kardashian, 31, began dating in January 2016 and had a baby girl, Dream, that November. They split a month later and Chyna sued Rob Kardashian, his mother and three of his sisters in October 2017.

In July 2017, he used social media to post pictures of Chyna’s naked breasts, backside and genitals. He also accused her of sleeping with another man in “the same bed Chyna and I made our baby in.” He later took down some of the photos.

In her lawsuit, Chyna, whose real name is Angela White, alleged she suffered significant damages and that the scandal caused her reality show with her ex-boyfriend, “Rob & Chyna,” to be canceled by E! She alleges that E! would have granted her a second season of the show but for alleged false statements against her, including alleged comments by the four female defendants to E! Network representatives in late 2016 and early 2017 that Chyna physically abused Rob Kardashian.

However, the evidence “unequivocally establishes” that the remark was “not understood in a defamatory manner,” according to the Kardashian-Jenner court papers. “And in any event, statements about plaintiff physically abusing Rob Kardashian are not false because … plaintiff in fact physically attacked Mr. Kardashian.”

Other allegations in Chyna’s complaint are currently being mulled by Hammock, who took those issues under submission on Tuesday.

Blac Chyna Judge Orders Kardashians, Jenners To Resolve Battle On Their Own→ 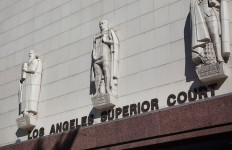