A wave of emailed bomb threats targeting businesses, schools and other locations across the country — including Southern California — had law enforcement agencies on alert Thursday, but the threats were not considered to be credible.

According to the Los Angeles County Sheriff’s Department, the agency is aware of the computerized threats and conducting investigations, “but no threat has been substantiated.”

Similar threats have been reported in areas such as New York City, San Francisco, Oklahoma City and New England. The threats demand a Bitcoin ransom be paid by the end of the day or an explosive device will be detonated.

“The threat demanded cash in Bitcoin or they would blow up the business. Similar threats were reported in cities across O.C. These threats are unfounded,” according to Garden Grove police.

In Redondo Beach, a building on Redondo Beach Boulevard was temporarily evacuated late Thursday morning due to a bomb threat against a business, which police determined was not credible.

The FBI’s Los Angeles field office issued a statement saying it was “aware of the recent bomb threats made in cities around the country, and we remain in touch with our law enforcement partners to provide assistance. As always, we encourage the public to remain vigilant and to promptly report suspicious activities which could represent a threat to public safety.”

In Riverside County, a business in Palm Desert was evacuated due to an email threat. The Riverside County Sheriff’s Department issued a statement saying the department is “one of several (Southern California law enforcement) agencies experiencing an influx of email threats. (The department) takes these threats very seriously and is conducting an investigation into each threat. At this time no threat has been substantiated.”

That statement echoed one issued by the New York Police Department’s Counterterrorism Bureau, which stated, “We are currently monitoring multiple bomb threats that have been sent electronically to various locations throughout the city. These threats are also being reported to other locations nationwide and are not considered credible at this time.”

One person who received the emailed threat at an unidentified location posted a copy on Twitter. The threat states there is an explosive device in the company’s building, and it demands a ransom of $20,000 in the internet currency Bitcoin to be paid by the end of the day. 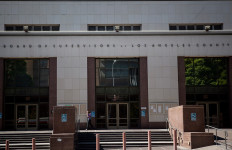