An ex-con suspected of cornering and harassing a 16-year-old girl riding an interstate bus in the Beaumont area was free Tuesday on $5,000 bail.

Eric Daniel Prindle, 49, of Bakersfield was arrested and booked into the Smith Correctional Facility in Banning Monday morning on suspicion of annoying a minor and public drunkenness. He posted bail within a few hours and was released.

According to the California Highway Patrol, the unnamed teen was riding a Greyhound from Phoenix, where she had attended a Comic Con convention, back to her home in Los Angeles when she encountered Prindle.

Officer Darren Meyer said the girl seated herself in the back of the bus, and as the coach transited the San Gorgonio Pass, the convicted felon got up from his seat a few rows ahead and situated himself in an empty seat directly adjacent to the minor.

“Prindle harassed and annoyed the victim inappropriately for approximately an hour, until she was able to discretely send a text message to a family member for help,” Meyer alleged.

He said Beaumont-based CHP units caught up with the bus as it entered Fontana via westbound Interstate 10, where it was stopped and officers came on board.

Prindle was questioned and taken into custody without a struggle on the spot, Meyer said.

An investigation revealed the suspect was on parole after serving time for assault with a deadly weapon, according to Meyer.

CHP: Girl Harassed on Greyhound Bus by Ex-Con was last modified: May 28th, 2019 by Contributing Editor 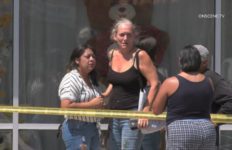 CHP: Man Stood in Front of Truck That Ran over Him→

Firefighter Says He Was Hazed, Harassed in the Workplace→