A Solana Beach executive pleaded guilty Wednesday to paying a $250,000 bribe to ensure his son’s admission to the University of Southern California as a volleyball recruit.

Jeffrey Bizzack, 59, pleaded guilty in Boston to conspiracy to commit mail fraud and honest services mail fraud, according to the U.S. Attorney’s Office in Massachusetts.

According to the terms of the plea agreement, the government will recommend a sentence of nine months in prison, a year of supervised release, a fine of $75,000 and restitution. Bizzack, the 51st person charged in the case, is scheduled for sentencing on Oct. 30.

According to court documents, Bizzack agreed with William “Rick” Singer and others to pay the bribe to facilitate the admission of Bizzack’s son to USC as a purported athlete, when in fact he was not.

Dozens of parents and college athletic coaches were implicated in the nationwide bribery scandal, in which wealthy parents paid Singer thousands of dollars to have their children’s entrance-exam scores doctored. In other cases, students were falsely admitted to elite universities as athletic recruits, even though they never had any experience in the sports for which they were being recruited, prosecutors said.

Singer pleaded guilty in March to charges including racketeering conspiracy and obstruction of justice.

OK I Did It! Rich Daddy’s Volleyball Bribe To Get Son Into USC was last modified: July 24th, 2019 by Contributing Editor

How Not To Set An Example For Your Kid: Dad, Son Nabbed On Suspicion of Starting Fireworks Garage Fire→ 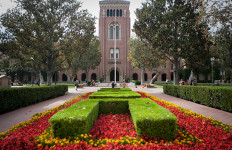