A child told authorities that a man tried to lure the youngster into his car near a Cathedral City elementary school Monday morning, prompting school officials to issue a warning to parents.

The Palm Springs Unified School District contacted the parents of Rio Vista Elementary School students via an auto-dialer message to inform them of the incident, which happened about 8:15 a.m. on Verona Road near the campus, according to PSUSD spokeswoman Joan Boiko.

The child said the man “pulled over in a light colored van and attempted to get the student into his vehicle,” and the student “was able to run to the school and report the incident, which has been reported to police,” according to the message.

The child — it was unclear whether it was a boy or girl — described the suspect as a white man in his 20s or 30s with black hair with brown highlights, weighing about 200 pounds and wearing a brown vest and blue jeans.

“Please remind your child to walk directly to and from school with at least one other person, to not talk to strangers and to report any suspicious person or activity to a trusted adult immediately,” the message said. 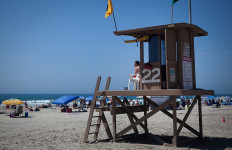