A convicted felon responsible for igniting two fires that damaged property belonging to an Anza woman he was stalking is expected to receive a 21-year prison term when he’s sentenced on Nov. 1.

Roger Dell Green, 74, of Banning pleaded guilty last month to two counts of arson and one count each of attempted arson and stalking in violation of a restraining order for the 2017 offenses. In exchange for his admissions, the Riverside County District Attorney’s Office dropped seven related felony and misdemeanor charges.

Green had been slated to go on trial this week at the Southwest Justice Center in Murrieta, but proceedings were vacated by Superior Court Judge John Davis after the plea deal was reached.

Davis indicated he would impose a sentence of 21 years, eight months in state prison under the terms of the bargain.

Green is being held without bail at the Byrd Detention Center.

County fire officials declined to specify the circumstances behind his acts of arson, but according to court documents, the fires occurred in March and May 2017, while the attempted arson happened on June 30 of that year.

The victim, identified in documents only as “T.P.,” had been in a dating relationship with the defendant but ended it and filed a restraining order against him months before the arson fires. Green stalked her between March and June 2017, according to court papers.

Arson investigators and sheriff’s deputies arrested the defendant without incident on Aug. 8, 2017. A Ruger .22-caliber semi-automatic handgun was seized at his workplace that same day, investigators said.

According to court records, he has prior convictions for robbery and conspiracy to commit first-degree burglary.

Explosion Sparks Fire at Marathon Petroleum Refinery in Carson; No One Hurt→ 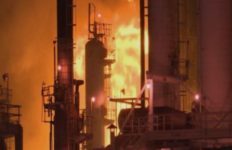