Aided by more favorable weather conditions Sunday, firefighters gained the upper hand over the 7,965-acre Saddleridge Fire in the Northern San Fernando Valley, where the last evacuation orders have been lifted after some 100,000 people were forced to leave their homes.

The annual Oktoberfest celebration at Mission College has, however, been rescheduled for Saturday from 4 p.m. – 8 p.m. Tickets purchased for the Oct. 12 date will be honored.

The Health Hazardous Materials Division (HHMD) of the Los Angeles County Fire Department conducted a field assessment Friday to check for possible damage to the Aliso Canyon Gas Storage Facility after the Saddleridge fire ran through it, but the assessment revealed no damage, officials said.

The next day, HHMD accompanied Air Quality Management District inspectors to the Aliso site to measure methane levels within the facility. The inspectors found no detectable levels of methane and no danger to residents returning to homes near the facility, officials said.

A 54-year-old man identified by KTLA5 as Aiman Elsabbagh died of a heart attack Friday morning in the Porter Ranch area while trying to protect his home from the fire. Los Angeles Fire Department Chief Ralph Terrazas said Elsabbagh was speaking to firefighters when he went into cardiac arrest, and he died at a hospital. According to reports from the scene, the father of two had been dousing the flames with his garden hose when he had the heart attack.

Three firefighters suffered minor injuries, including one eye injury, according to the LAFD.

Humidity levels increased to 20-25% by Saturday night and the winds died down to 3-5 miles per hour, National Weather Service Meteorologist Kristen Stewart said. Sunday’s humidity was up to 30% in the San Fernando Valley, and winds were expected to be 10 to 20 mph in the evening, according to the NWS.

Regulators said air quality would continue to be unhealthy through at least Monday for sensitive individuals in the San Fernando, Antelope, Santa Clarita and San Gabriel Valleys. People who can smell smoke or see ash are advised to remain indoors with windows and doors closed, and to keep pets inside.

The massive fire had prompted a mandatory evacuation order for all residents of Porter Ranch north of the Ronald Reagan (118) Freeway from Reseda Boulevard to DeSoto Avenue, residents of Granada Hills from Balboa Boulevard and north of Sesnon Boulevard to the Ventura County border, and the Oakridge Estates community north of the Foothill Freeway in Sylmar. In all, it affected roughly 23,000 homes — equating to about 100,000 people, authorities said. All evacuation orders were lifted Saturday evening.

As of 1:45 p.m. Sunday, all evacuation centers were closed, according to the Los Angeles Fire Department.

Roughly 1,000 firefighters from LAFD, Los Angeles County Fire Department and Angeles National Forest were on the ground battling the flames over the weekend, aided by water-dropping helicopters and fixed-wing aircraft dropping fire retardant.

Los Angeles Mayor Eric Garcetti, who cut short a trip to Copenhagen, Denmark due to the fire, and county Board of Supervisors chair Janice Hahn both signed local emergency declarations.

Gov. Gavin Newsom declared a state of emergency for Los Angeles and Riverside counties. The declarations free up local and state resources to aid in the firefighting effort.

There was no immediate word on what sparked the blaze.

Various media reports cited a witness claiming the first flames erupted at the base of a Southern California Edison transmission tower along Saddle Ridge Road. Terrazas said he was aware of the reports “of a witness seeing fire fall from a transmission tower,” but there still had not been any determination of the cause.

The fire was first reported just after 9 p.m. Thursday off the westbound Foothill (210) Freeway near Yarnell Street and Saddle Ridge Road in Sylmar, and quickly spread due to wind-blown embers that jumped the Golden State (5) Freeway about 11:20 p.m., spreading the flames into Granada Hills and Porter Ranch. 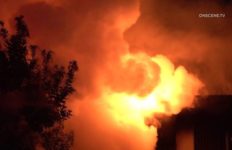