Stolen artwork valued at about $800,000 was turned over to authorities by a San Fernando resident who said the lithographs were found in a late relative’s storage facility, Los Angeles police reported Tuesday.

The signed lithographs, by Benjamin Crème, were turned over to detectives on Sept. 25, according to the Los Angeles Police Department.

“Detectives received a phone call from (police officers) in Mission Division about a person who discovered stolen artwork and wanted to turn the artwork over to authorities,” according to an LAPD statement. “Commercial Crimes (Division) detectives responded to the person’s residence in the city of San Fernando where it had been stored for the past few years.”

The individual, whose name was withheld, told detectives that the artwork was previously in possession of a relative who had died a few years ago.

Stolen Artwork Valued at $800,000 Turned Over to Police was last modified: November 5th, 2019 by Contributing Editor 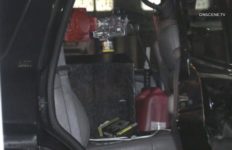 Suspicious Vehicle in Van Nuys Had Stolen Gasoline Inside→

Auto-Theft Suspect Who Was Wounded in Police Shooting ID’d→