A Julian man was behind bars Tuesday on suspicion of fleeing after the car he was driving struck and fatally injured a bicyclist on a rural road east of El Cajon.

Craig Wendell Nelson, 56, was heading east on Dehesa Road near Singing Hills Golf Course when his 1993 Mitsubishi Mirage veered into a bike lane east of Willow Glen Drive and hit Kevin Wilson of La Mesa from behind about 10:45 a.m. Monday, according to the California Highway Patrol.

Following the crash, Nelson allegedly kept driving to the east and south before pulling over on Sloane Canyon Road and fleeing on foot, CHP public-affairs Officer Travis Garrow said.

Officers eventually found the abandoned vehicle, and a helicopter search crew spotted Nelson in a nearby brushy area. He was arrested and booked into San Diego Central Jail on suspicion of vehicular manslaughter and hit-and-run.

Nelson was being held on $50,000 bail pending arraignment, tentatively scheduled for Thursday afternoon.

Motorist Sought Who Drove onto Sidewalk and Hit Pedestrian, Costing Her a Leg→ 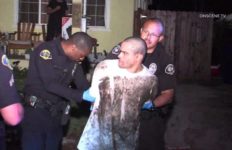