A standoff of more than four hours with a man who refused to come out of a car parked at a gas station in Walnut ended with no arrest, authorities said Thursday morning.

Deputies surrounded the vehicle at a Chevron gas station near Grand Avenue and Amar Road around 5:20 p.m. Wednesday after the man caused a disturbance inside the business, then went into a vehicle when deputies arrived, according to Deputy Eric Ortiz of the Los Angeles County Sheriff’s Department.

Rubber bullets and bean bag rounds were fired by deputies at the vehicle, but the man stayed inside.

The suspect communicated with deputies by writing notes that he held up to the windshield, but refused to exit the vehicle.

About 9:40 p.m., deputies determined no crime was committed and the man was not a threat to himself or the public. Authorities left the location without taking the man into custody. 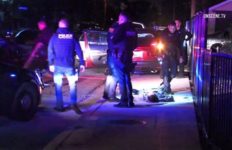 Multiple Courthouses Closed, Hours Reduced at Others Because of Coronavirus→